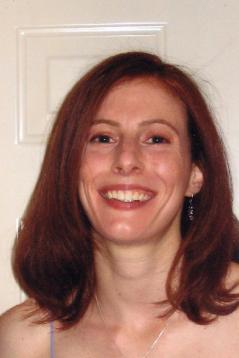 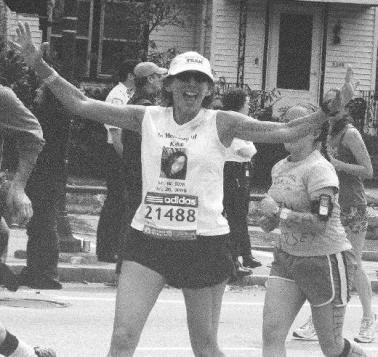 My husband Larry and I  met Judy and Charlie Lynch and their two girls in 1984. It was the first day of Clifton Park’s tee ball practice, and our two six-year-olds were assigned to the same team.  The parents and our two three-year-olds got to know each other while watching the games. Our son Adam spent most of his time in the outfield picking dandelions. Katie’s beautiful red hair couldn’t be contained under the maroon baseball caps all the pint-sized players wore.

In 1987, our families connected again at the Knolls Gang, a locally-run summer swim team. On the first day of practice, our daughter Julie brought over  “my new friend, Julia” to meet us. The two older siblings remembered each other from tee-ball. The four adults spent the next several years sharing conversation and stopwatch duties at the meets.

Larry and I left swim meets behind when Adam and Julie got involved in running. Charlie and Judy continued to breathe chlorine at various Capital District pools as their two girls continued competitive swimming. Our four children shared classrooms and proms and family get-togethers.

Meanwhile, as the years passed, Judy and Charlie became two of our dearest friends. We frequently met for dinner or a movie, a concert at Saratoga Performing Arts Center,  or a leisurely tour of the Clark Museum in Williamstown, Massachusetts.

Katie was co-valedictorian of the Shenenehowa graduating class of 1996. She went to Drew University on scholarship, where she was the captain of her swim team. In 2000, she graduated with honors, got a job with Ernst Young in New Jersey, and eventually met a wonderful man. Friends and family waited expectantly for an email announcing their engagement.

In  September 2008, Judy sent out a completely different e-mail with devastating news.  “Katie is sick” read the subject line. Katie had been  diagnosed with acute myelogenous leukemia (AML), one of the deadliest forms of blood diseases. Because of her general health and young age, she had at best a 50/50 chance of recovery, and an aggressive medical approach was needed— immediately.

Katie, always one to accept a challenge,  determinedly underwent everything the doctors threw at her: chemotherapy, numerous hospitalizations, painful side effects and biopsies, and countless blood tests, and transfusions.

While Katie was undergoing treatment, friends and family reached out to ask how they could help. Judy, a runner, had heard about Team in Training (TNT) through her many years of running, the  flagship fundraising program for the Leukemia & Lymphoma Society (LLS). LLS is the world’s largest voluntary health organization dedicated to funding blood cancer research, education and patient services. TNT volunteers, many themselves survivors,  train to complete a marathon, half marathon, cycle event, triathlon or hike adventure, while fundraising to support the fight against blood cancers.

In 2009, Judy signed up with TNT  to raise money by her participation in the New Jersey Half Marathon. Katie had gone into remission, and Judy regarded the race as a victory lap, with Katie and her now-fiancé meeting Judy at the finish line. Friends and family, including Larry and I, donated money to LLS in Katie’s honor.

Katie would not watch her mother complete the race. The cancer reoccurred, and she was in the hospital preparing for a stem cell transplant. Judy’s fundraising became her fight for her daughter’s life. She raised over $12,500.

Tragically, Katie’s positive attitude, her strong will to live, and the undergoing of every conceivable treatment were not enough. Less than fourteen months after her diagnosis, the Lynch’s beautiful, sweet, intelligent daughter died on October 26, 2009. She was 31.

Before and during Katie’s illness, running had been Judy’s therapy, her go-to for coping and figuring things out. After Katie’s death, it was her bridge into life without her daughter, a way to move forward and memorialize Katie. She would tell the world about Katie at the marathon, wearing a shirt with her picture, her dates, and messages to fight leukemia, donate blood, and join the bone marrow registry. Immediately after the memorial service, Judy signed up for the 2010 Boston Marathon. A torn hamstring delayed that goal, but she found other races—in Atlanta, in the Capital District, and in 2011, her first Boston Marathon.

Judy felt the need for something positive to result from Katie’s tragic death.  She made a personal commitment to do one event a year for TNT, raising as much money as she possibly could each time.

With Katie as her inspiration, Judy accepted challenges she never would have considered. Along with running races ranging from 6.1 miles to 26.2 miles, she expanded her fundraising efforts to include a triathlon and two one-hundred mile bike rides. This year, Judy will run the New Jersey Half Marathon, where she ran for Katie the first time in 2009. Her goal is to raise $15,000.

Charlie has been Judy’s number one supporter, and he himself supports her fundraising for LLS through his Craft Beers for Cures sales. Together, the Lynches have raised a total of over one hundred and one thousand dollars for blood cancer research.

“I run not only for Katie,” said Judy, “but also for the fighters, the survivors, those not yet diagnosed, and especially for those whose lives were cut short way, way too soon.”

On January 16, 2017, Katie would have turned 39. Through their tzedakah—their charity and giving, Judy and Charlie have kept Katie’s memory alive not only in their hearts but also in the hearts of their many supporters.

I often think of Katie’s determination, courage, and grace under terrible circumstances. And I deeply respect and admire my dear friends for their incredible fundraising efforts they have undertaken in memory of their daughter. Their hope is that other families can be spared the devastation of losing a child or loved one.

For more information or to donate, please connect to Judy’s webpage at http://pages.teamintraining.org/vtnt/nj17/JLynch.