On the lanai in our new home, Larry and I have a large set of wind chimes that make beautiful sounds with the slightest breeze. One morning I had a Shalom Club board meeting at my home. The patio door was open, and I commented to those gathered around the dining room table that I never get tired of hearing the music. “It’s fine during the day,” one of the board members commented. “But have any of your neighbors complained? I had to ask my neighbors to take theirs down as I was losing sleep!”

How ironic that I never gave it a thought, I who has struggled with noise most of my adult life.

It certainly wasn’t a problem when I was young. Our house in Keeseville backed up to bowling alley on the right and lumber yard to the left. Often times the lumber trucks would come in at 2 am. And the noises of the pins crashing in the bowling alley? That was constant.  In addition, we lived less than 15 miles from Plattsburgh Air Force Base, and the jets flew over our house all the time. I never heard them, never thought anything about them.

When my parents purchased a cottage on Lake Champlain in 1966, we were lulled to sleep each night by the sound of crickets. Guests from the city who stayed over night complained, but to me it was a symphony. When I went to college, the dorm was always noisy. Radios blared, people stomped upstairs, and parties went on into the wee hours on the weekends. In addition, our campus was a scant few miles from the Albany airport.  Planes were flying over our dorms and our classrooms all day. Did I hear any of that? Never.

With all this history of noise, you would think I would have been totally desensitized. The apartments that followed, first with a former college roommate and later in our first two years of marriage, had just the occasional sound of footsteps overhead.

In 1976, Larry and I bought our first home, a nice raised ranch on a very quiet street in Halfmoon. The first night we moved in, we opened our bedroom windows to get some fresh air and were hit with a wall of noise. As we looked out into the darkness, we saw the headlights of the cars flickering through the trees. What we hadn’t realized when we bought the house was that we were less than a half a mile from the Northway. The sound from the cars varied from a low background hum during the day to a cacophony of  sounds during the rush hour. The winter cold exacerbated the volume. The worst time was in the summer when the windows were open. We could even hear trucks changing gears.

It would be wonderful if I could say that I handled this with calm and fortitude, but I fixated on the noise. Despite a lovely backyard and a big flower garden, I spent as little time outside as possible. During the day, I kept the doors and windows shut and turned up the volume on the radio or the television. At night, we turned on the window air conditioner in our bedroom so we didn’t have to open the windows. Within two years, we put the house up for sale and began to look for a quieter spot in Clifton Park.

On a warm September afternoon, our realtor showed us a lovely home on a quiet cul-de-sac two miles west of the Northway. The front lawn was plush and green, the skies were blue, and a cute squirrel lopped its way across the expansive front yard. The back yard backed up to a quiet wooded area, and the house was immaculate on the inside. We put a bid on it the next day.

A week later, I made arrangements for my mother-in-law to see the home. While we were waiting for the realtor, we saw a plane fly over our heads on its way to the Albany Airport. It was so low that we could read the Southwest insignia on its side and see the wheels descend as the pilot prepared for their descent. “My goodness,” my mother-in-law exclaimed. “You thought the Northway was bad! How in the world are you going to handle the planes?”

As soon as I was near a phone,  I called Larry and burst into tears. “We are on a flight pattern!” I cried. “The plane noise is worse than the noise from the Northway.We can’t buy this house!”

Larry tried to calm me down. It was too late to go back on the contract, and I felt as if I was going from the frying pan into the fire.  However, over the thirty-six years we lived there, I made peace with them.  As a matter of fact, that last morning, when I said goodbye to our neighbors before we started our 1300 mile trip to our new home, I cried like a baby, wondering how in the world I could leave our lovely, quiet cul-de-sac behind.

Larry and I drove down to Florida pulled into the driveway of our new home in early June evening. The house was closed up, and the air conditioning was on full blast to counter the early summer heat and humidity. We unpacked the suitcases and boxes and wine we had brought down with us to settle in a bit before the moving van was to arrive three days later. By 10 o’clock, we were tired and ready for some down time. We poured two glasses of wine and opened up the doors to our lanai. We were hit with a wall of noise.

“What in the world is that?” Larry said. It took us a couple of minutes for us to realize that the roar was coming from the nature preserve behind our home. We had arrived at the height of mating season in Central Florida, and we were hearing tree frogs, alligators, wild boars, and goodness knows what other animals lurked in the wildlife preserve behind our house. The noise was louder than any college dorm, any expressway, any flight pattern we had ever heard. But somehow this was different. This was the noise nature made, similar to the sounds I heard on Lake Champlain years before. I was home.  I started laughing, and I gave Larry a hug. “We’re home!” I said. “L’chaim!” And we clinked our glasses and toasted our new home, our new life, our new adventure. 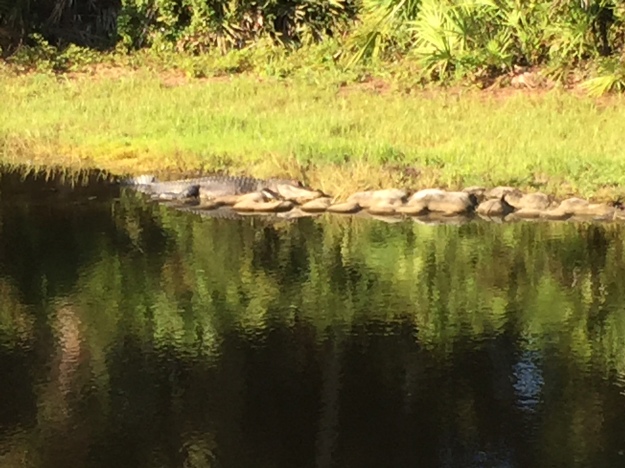 The pond behind our home in Florida

Okay, so this young man was not living his dream. But all I could think of is that the clerk appeared to be the same age as a friend of mine who became a quadriplegic twenty years earlier as a result of a freak accident. “Be grateful for what you have,” I wanted to say to this total stranger. “Don’t count the hours; count your blessings.”

On Passover, we Jews celebrate the physical and spiritual redemption from slavery. Each year, we sing Dayanu, a song which lists the steps leading to our freedom. In it, we are reminded of our need—our responsibility—to be grateful for all G-d has given to us.

Yes, it is sometimes difficult to be grateful. College degrees and sometimes lead to menial job. Cars break down; toilet overflow; a bite into a hard candy results in a $3000 dollar dental bill. But as a dear friend said to me after I complained about a costly home repair, these are all First World problems.

In addition, in our highly commercial, secular world, it is sometimes difficult to be happy with just enough. We are bombarded with advertisements promising us happiness if only we purchase a new car, a new home, even a new brand of soap. We are exposed to all this noise on television, on billboards, on ever-targeted ads on the internet between our Facebook posts.

I am sure the Jews who escaped Egyptian slavery complained. Some of the kvetching is recorded in the Torah, but I can only imagine the grumblings that were not written down. “Manna that tastes like coconut cream pie again? For one night, can’t it taste like my mother’s matzoh ball soup?” Or: “Who put Moses in charge? We’ve been wandering this desert for forty years. The man can’t find his way out of a paper bag!”

The child of parents who were on different ends of the “cup half full”/cup half empty” continuum, I struggled as to whether my father’s rose colored view of the world was a better way to go than my mother’s practical but less than optimistic outlook. Whereas my father was content with his life, my mother often compared herself and our lives to others, and she saw the grass as greener in the other’s yard. “Comparison is the thief of joy,” said Theodore Roosevelt. And also, in my eyes, the thief of gratitude.

When looking for property in Florida, Larry and I made the conscious decision to downsize. We chose a smaller home that, in line with most houses in the Sunshine State, had no basement and a fairly inaccessible, extremely hot attic. We purchased the home with all its furnishings in a community whose  home owner’s association that took care of our lawn and shrubbery. As a result, we were able to  divest ourselves of much of our belongings and start over.  Once we unpacked—and gave another load of unneeded items to a local charity–we assured ourselves that we were never going back to having so much.

Despite my best intentions, however, I began to fall into my old habit of  acquiring more than we needed. The search for that one last item to complete our new home—a new outdoor seating set, a water softener, updated lighting fixtures— was taking me away from where I wanted to be: grateful for what I had.

One day, while at a salon getting my hair cut, I saw a poster with the following affirmation: “Gratitude turns what we have into enough.” And somehow that quote from Melody Beattie was the kick in the pants I needed.

Researching studies in positive psychology, I learned that those who are habitually grateful are significantly happier—and even healthier— than those who are not. One recommended method to enhance these feelings is by maintaining a gratitude diary in which one records on a regular basis three to five things for which one is grateful.

Using a beautiful floral-covered journal a dear friend had given me as a going away gift, I started ‘counting my blessings’ each night before I went to bed. Some entries were major milestones: “I saw my granddaughter crawl for the first time!” Other day’s reflections were more mundane: “Larry and I laughed our way through a great ‘Big Bang Theory’ episode.” No matter what the magnitude, I was ending my day focusing on the positive.

In the process, I have turned the focus from how many material possessions I have to how much goodness I have in my life. “Collect moments, not things” says a Hindu expression. The journal gives me the opportunity to capture those moments: savoring an Upstate New York apple, reading a book to my granddaughter, sitting on our lanai and viewing the wildlife in our pond, appreciating one more day of good health.

“If the only prayer you said in your whole life was thank you,” wrote Meister Eckhart, “that would suffice.” Or, in the word of the Passover seder, ‘Dayanu.’ Chag Sameah!