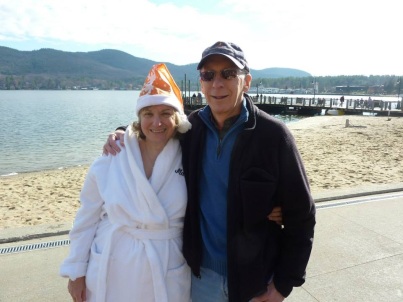 FREEZIN’ FOR A REASON

I had always been intrigued by stories and pictures of polar plunges, where hundreds of smiling people clad in only their bathing suits head into a body of water in the middle of the winter. They say they are having fun. I never got it until I found myself diving into Lake George, water temperature around 50 degrees, on November 16. Crazy? Yes! Glad I did it? Double yes. Because I was “freezin’ for a reason.” I was raising money for Special Olympics Capital District.

Special Olympics is the world’s largest sports organization for children and adults with intellectual disabilities. The Special Olympics Capital District region provides year-round training and competitions to more than sixteen hundred athletes from twelve counties in fourteen different sports. For a number of years, Larry and I have been involved as Special Olympics track and field and bowling coaches.

We have also participated in Special Olympic fundraisers. One of the most popular and well known in the Capital District is the Polar Plunge, where hundreds of people plunge into Lake George on the third Saturday of November. In a moment of insanity, I had signed up and participated in the plunge in 2011. Within minutes of coming out of the water, I swore to anyone with ear shot that I would never do it again.

I am no scientist, but to me this is definite proof that humans have very short memories. Our schedule in 2012 prevented my doing it, and I was thinking of finding another excuse for 2013 until…..

In a second moment of insanity, I committed to rejoining Freezin’ Friends, a team of plungers headed by Joni Rhodes from Schuylerville. Her son Nick participates in several Special Olympic events, including our track and field program, and I again wanted to raise money to support athletes like Nick. In the middle of September, I began a fundraising blitz, mostly through emails and Facebook. The response was amazing. I had pledges from family and friends across the country and even from England. Most pledged on line, but many others handed me checks or cash, commenting “Better you than me!” and Boy, you are brave!” By the day of the plunge, our team had raised close to $5000, and the region total was approaching $77,000.

By this time, you would think that I would be mentally and physically ready to dive back into Lake George. I hadn’t died the first time; my heart had held out; I didn’t even catch a cold. But in the days before the plunge, I had nightmares about going into a freezing lake. In addition, this year I was going to finish what I had started in 2011. In my first year, most of my supporters congratulated me and praised my bravery for plunging up to my neck. However, a few people kiddingly questioned as if I had ever gone in the lake, as my hair was still dry and the water droplets on my body didn’t show well on the photos. This time, I was going to make sure that pictures showed a soaked bathing suit and a wet head so that no one would doubt my commitment.

We were very fortunate with the weather. The morning of the plunge was a beautiful, sunny, calm day, with air temperatures in the fifties. Larry and I stopped at the registration desk and then headed down to Shepard’s Park Beach. Over my bathing suit, I had flannel pants, a thermal shirt, my Polar Plunge sweatshirt, and a warm terry bathrobe. Under my water shoes were heavy woolen socks. I located our team by finding Joni in her traditional Dr. Seuss hat she has worn for each of the seven plunges in which she has participated. I recognized most of my teammates from 2011, a mix of Nick’s family, friends, and Special Olympics coaches. Om addition, a large group of students from Schuylerville High School had signed up for the fundraiser, bringing our team up to over thirty people. Joni provided all of the members of the team with a choice of colors in Santa hats.

Several other teams of plungers were also on the beach, including Max’s Buddies, Freeze Duchenne, and Brian’s Bashers, and the Siena men’s baseball team. We spent the next couple of hours munching on bagels, sipping hot coffee, taking pictures, and connecting with members of our team and the other plungers. Several were in costume: capes, polar bear hats, boas, and, in the case of one man, a skimpy beige bikini bathing suit. My Miley Cyrus look,” he explained.

At ten minutes before noon, all the plungers stripped down to their bathing suits and, shivering despite the warm sun, lined up to wait for the signal to hit the water. At exactly twelve noon, led by three athletes holding the Special Olympics torch, over five hundred and fifty crazies streamed into Lake George.

As my ankles hit the water, I faced my first obstacle. As our team was near the end of the line, we were going into the lake when the members of the Siena men’s baseball team were coming out. Fast. Blindly, with no concern for who was in their way, I darted through their hurling bodies until I found a clear spot in the water, took a deep breath, and dove in, orange Santa hat and all.

OH MY GOD! Why didn’t I remember it was this cold! I immediately thought of those poor people on the Titanic and had visions of Leonardo DiCaprio’s Jack clinging onto the edge of the makeshift raft that held Kate Winslet’s Rose. I could not get out of the water fast enough. I ran onto the sand, hair and body dripping, searching desperately for Larry and, more importantly, my bathrobe and towel. As soon as I found him, I asked, “Did you get a picture?” Larry said yes, but there must have been ice in my ears, as I didn’t hear him and headed back into the water for a second totally unnecessary photo opportunity.

I have to say that it wasn’t as bad as the first time. Maybe the sun had warmed my body. Or I was so numb I couldn’t tell the difference. Larry took a couple of more pictures, and I was finally able to head for the women’s warming tent, where I quickly changed into dry clothes. We drove back to Clifton Park with the car’s heater going full blast.

Later that afternoon, Larry and I talked about the plunge over large bowls of steaming chicken and rice noodle soup at a local Chinese restaurant. “Next year, I need to wear a different bathing suit and a pair of shorts as those pictures I posted on Facebook are just too embarrassing,” I said. “And maybe if I start earlier, I can raise more money.”

Larry nodded, “Let’s just see what happens with our schedule next year.”

A final note: Larry has yet to sign up to plunge, citing several reasons why it should not be a joint effort: He needs to be on the shore to hold my bathrobe and towel. He needs to take pictures. He needs to drive me home as I will be too cold to drive myself. He doesn’t want to take away from “my” event. Maybe he has more common sense than the rest of us, or maybe he just doesn’t know how to have fun.

1 thought on “Freezin’ for a Reason”