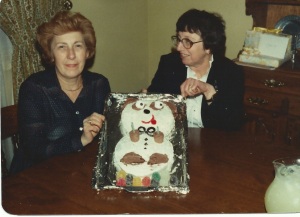 My two moms at Adam’s second birthday party. Doris Shapiro is on the left and Frances Cohen is on the right.

Larry has a very special relationship with Mother’s Day: He was born on this Hallmark Card Holiday on May 9, 1948.

I can only imagine the joy Doris and Ernie felt when their second child, a son, was born. He was a beautiful baby. From what I heard from his mother and still hear from his three sisters, Larry was an easy child: quiet, never got into trouble, spent time either in his room or with his friends on the baseball field. He grew up, went to college in Boston, and completed his master’s degree at Syracuse University.

By the time he finished graduate school, Larry’s parents were more than anxious for him to meet a nice Jewish girl and settle down. After meeting me at the Purim party, Larry kept me under wraps until that May, when he invited me to his house. I had a major strike against me; I had completely forgotten his birthday, which fell on Mother’s Day that year. But Doris let that pass once Larry brought me home. Jewish? Check! Nice family? Check! Single and available? Double check! By the end of June she and Larry’s Bubbie Rose, began to put some pressure on him. So what if we had only been dating for three months?

“So what is your relationship with this person?” Doris asked.

Larry and I dated through the summer, and August, we were already talking marriage. Of course, we didn’t share that with our families, but Doris was still working on it. One day, she showed me her engagement ring. “Whoever marries my son will wear this ring,” she told me. Very subtle!

When his first attempt at proposing to me in Saratoga National Battlefield was thwarted by a bee sting, Larry tossed romance out the window and asked me to marry him on our walk home from Rosh Hashanah services on September 28. We shared the news with my parents over the phone, but we saved our big announcement for his parents at the Yom Kippur Break-the-Fast on October 6, which coincided with Ernie’s birthday.

“I have a special birthday present for you, Dad,” Larry announced over coffee and birthday cake.

“Another ugly tie?” snorted one of his sisters.

Everyone started hugging us and yelling “Mazel tov!” Doris was true to her summer promise. She ran into the bedroom, grabbed the engagement ring, and put it on my finger. I am sure I am one of the only people in the world who had her future mother-in-law place an engagement ring on her finger. Again, very subtle!

After that day, Mr. and Mrs. Shapiro became “Mom and Dad.” I was really fortunate in that I now had two sets of parents who loved me deeply. Larry’s parents treated me as well as, if not sometimes better, than their own children. Mom, happy with Larry’s choice, often kiddingly said, “If you two ever get divorced, I get custody of you.” I may not have been able to make a brisket or a bed as well as my mother-in-law, but for the most part, I could do no wrong. When we delivered two grandchildren, it was the icing on the cake.

Throughout their lives, Mom and Dad were wonderful in-laws. They took great joy not only in their children’s accomplishments, but also in the accomplishments of their daughter/sons-in-law. They adored their seven grandchildren and showered all of us with their love and their generosity for many years.

My parents and in-laws hit it off from the first time they met, and they spent many happy times together as dear friends as well as mishpocha. When they both retired, my in-laws purchased a condo a minute’s walk from my parents. Ernie and Bill golfed; Doris and Fran shopped and shared confidences over coffee.

When Mom died during heart surgery in April 1994, we were all devastated. And when Dad followed her a mere eight months later, the grief was overwhelming. Since their passing, so many wonderful events have occurred where they were not there physically but were there in our hearts. At so many occasions—bar and bat mitzvahs, graduations, weddings, the birth of their great-grandchildren—at least one of the children or grandchildren have said, “Mom and Dad would have been so proud!”

A few years before Mom passed away, I gave her a framed poem entitled “My Other Mother.” The first lines read, “You are the mother I received/the day I wed your son/And I want to say/Thank you Mom for the loving things you’ve done.” She kept it on the wall in her bedroom. When she passed away, I took the poem and hung it in our bedroom, next to our wedding picture. So on this Mother’s Day, I want to tip my hat to my two moms, the one I received at birth and the one I was given through marriage.