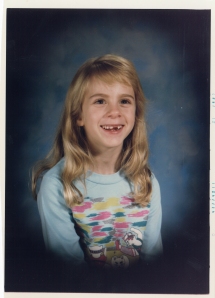 Every August, newspapers are loaded with advertisements for back-to-school clothes. Viewing the options is an experience for me: lacy tight tops, skinny jeans, and leggings for the girls; t-shirts and jeans for the boys. The choices are a far cry from what I wore to school in the fifties and sixties.

I can still remember the smell and feel of new clothes that I put on for elementary school. I always got a couple of new dresses, sweet cotton prints with Peter Pan collars worn with white anklets and sturdy Mary Janes. Since my September birthday always fell close to school opening, new school clothes were included in my presents. I felt a little cheated, as my siblings and friends were getting new clothes, and it wasn’t even their birthday.

By the time I entered junior high, I became more interested in fashion and studied Seventeen magazine all summer, admiring the “mod” look popularized by Twiggy and Jean Shrimpton. Upstate New York was not exactly the fashion capital of the world, but I tried. My stand-by outfit in the mid-sixties was a solid a-line skirt with a ribbed or “poor boy” sweater; a jumper with a turtle neck, or a blouse and a pair of ‘skorts,’ a skirt/pant combination. However, my favorite outfit was a short sleeve wool ‘Mod’ dress, orange with a white hem and white stripes running horizontally down each side. When I wore it, I felt as if I were one of those beautiful, skinny models.

Skorts were the closest I got to pants, as girls were not allowed to wear slacks to our school. My sister Laura and a group of her friends were sent home in their senior year, 1960, when they all came dressed in pants. This all changed in 1966 when one of Larry’s classmates at Saratoga Springs High School was sent home for “improper attire” when she wore slacks to school on a cold winter’s day. The school’s Board of Education decision was overturned by New York State Commissioner of Education, James Allen, who ruled in the student’s favor, freeing female students across the state to forgo dresses and skirts for the comfort of pants. Of course, what we wore, the tailored solid or tweed woolen styles of the 1960s, is a far cry from the leggings and torn jeans that are so popular now.

Once I had children, my job was to shop for them. Dressing Adam for kindergarten was easy. I got a number of Healthtex polo shirts and pant sets from Larry’s parents’ store in Schuylerville, and Adam was perfectly happy. As he got older, Adam switched to jeans and superhero or Star Wars tee shirts.

Then came Julie. Getting her dressed for school became a major battle each morning, especially in first grade. Over the summer, I had taken her clothing shopping, and we had selected several new outfits. When school started, however, she complained that nothing felt comfortable. Her preferred but limited wardrobe came down to one turquoise tee shirt with an imprint of three dancing cats on the front; two pairs of leggings, white with silver metallic stars in the fabric; two pairs of frayed and graying white socks with holes in the toes; and one pair of worn pink sneakers with ratty shoelaces. We had major fights for several weeks. I finally gave in as it wasn’t worth the time and energy. Every night, once she went to bed, I would wash and dry her “kitty cat” outfit, and every morning she put it back on. She wore that shabby outfit almost every day for an entire year.

When Larry and I went in for a teacher’s conference in the spring, I felt I had to apologize. “Honestly, Julie has other clothes, but she chooses not to wear them,” I explained. “Julie wears the same outfit every day because she is comfortable in it. I wash them every night, so she is always clean.”Julie’s teacher smiled and said that was common with first and second graders. Julie also hated to be warm, and she wore an unzipped light winter coat, usually with no hat and gloves, down to the bus, even if it was bitter cold outside. I finally gave up on that battle as well, deciding that she was smart enough to figure out if she needed to add extra layers.

Because of my experience with Julie, I’ve learned to appreciate outfits worn by other young children. When I see, for example, a little girl wearing a flowered top, plaid pants, a pink tutu overskirt, polka dot rain boots, and a tiara for good measure, I ask her if she picked out her own clothes and then compliment her on her good taste. My favorite picture of my great nephew captured his three-year-old self sitting in his car seat on the way to swim practice with his swim suit, his Spiderman pajama top, and cowboy boots. Guess who picked out his outfit for that day?

To this day, Julie hates the heat. She lives in Colorado at 9000 feet, which only has three months of summer. Yes, she is happy as a big horn sheep living in the mountains. To her credit, however, she has become a sharp dresser. Now when I visit her, she takes me clothes shopping, and I am happy with her suggestions. And, thankfully, not one of her choices has included dancing kitties or white leggings with silver metallic stars.

2 thoughts on “Skorts, skirts, and kitty cat shirts: What are you wearing to school this year?”