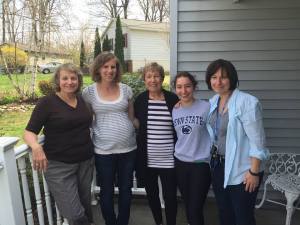 Julie and me with family.

When our daughter Julie was expecting our first grandchild, she called me to tell me about the children of her friends, both around eighteen months old. She commented that the little boy is a little fussy and needy, with frequent meltdowns. Her other friend’s child is  easy, calm and sweet; her name “Grace” says it all. Julie said that she hopes her child like Grace. My comment? “So you want a Grace, not a Julie, huh?” Not surprisingly, she wasn’t appreciative of my observation.

Larry and I were ecstatic the prospect of becoming grandparents. Julie and Sam had been married eight years prior to her pregnancy, and I wasn’t sure if they wanted to have children. Over Thanksgiving, 2014, however, we learned they were expecting a baby on a walk along the Mohawk bike path. Sam pointedly asked me how we were enjoying our hot tub. I told him how much we loved going in on cold  November days, “A day like today!” I offered them towels, robes, a bottle of wine, and privacy.

“Because [—pregnant pause—] I am carrying your grandchild.”

Once I stopped jumping up and down, and once we promised we would not share the news with ANYONE until at least mid-January, I began reflecting on words of advice I could give to the new parents. On Mother’s Day 2015, in honor of her impending motherhood, I gave Julie the following advice:

Nothing will prepare you for the moment you hold your baby for the first time. Throughout my first pregnancy, Larry and I were thrilled about becoming parents. However, Larry and I had several discussions as to how our life would not change that drastically once s/he was born. We would bring our child everywhere, and we would continue to travel and work and socialize as we had done before. Once we each had held Adam in our arms for less than a minute, however, we knew that our lives were never going to be the same. The reality of taking care of a tiny, dependent being who needed every ounce of our physical and emotional attention to survive put any ideas of “business as usual” out the window. In fact, we didn’t mind turning our lives upside down. We would move mountains to make sure our son was well fed, dry, content, and especially safe. Three years later, I harbored similar thoughts regarding status quo while awaiting the birth of our second child. During my pregnancy, I thought to myself, “Okay baby, I will love you, but just know that we already have a child, and he will  come first.” Again, I was proven wrong. The bonding was immediate and powerful, and our arms and hearts were more than big enough to accommodate another child.

Children don’t grow like lettuce. Whenever I encountered a bump in the road while raising our children, whether it was braces or a bad track meet or a broken heart, my mother would offer her favorite expression. Unlike lettuce, she would remind me, which you just put in the ground as a bunch of seeds and harvests thirty days later, children are work intensive. Things don’t always go smoothly, and you don’t sail through the eighteen years until they head off for college. It took me a while to realize raising children was more like growing prized orchids. And I have no green thumb.

Give your child roots to grow and wings to fly  While raising these “delicate orchids,” Larry and I tried provide Adam and Julie with a supportive nurturing environment throughout their formative years. We tried to give them moral values, a strong sense of community and personal responsibility. It was not until Julie packed up her life in my used Toyota and moved to Colorado and Adam headed to the West Coast for law school and life in San Francisco that the Dalai Lama’s words wholeheartedly hit me. Oh, how I envy my friends who have children ten minutes away! I would even settle for three hundred miles. But this was not to be. They have forged a life a long plane ride—or two!—away. They both have put down their own roots far from where we live but are happy, settled, content, and doing what they need to do.  We hope the root system we gave them will guide them in their journeys.

You ultimately know what is best for your child.

When Adam was six weeks old, I drove him to a local mall, put him in a red umbrella stroller, and pushed him through the stores, my first time shopping since he was born. A woman stopped me and said, “Oh my goodness! Your baby is all crunched up in that stroller, pale as a ghost! He looks dead!” I immediately pulled Adam out from carriage. He began howling with rage because I had jarred him awake. As she walked away, the “baby expert” commented, “Oh! I guess he was okay!” I learned quickly that I knew what I was doing, not some stranger. Remember those roots your parents gave you? Trust that they will help you grow as a parent.

Ironically, during Julie’s pregnancy, friends gave us advice about grand-parenting. We were told repeatedly that the moment we held our granddaughter in our arms for the first time, our life would never be the same. “It’s different with a grandchild,” a friend said. “It is as if you are holding your future.” We even got advice about when, where, and how to give advice to Julie and Sam. Until then, I hoped that the “mommilies” I gave Julie that Mother’s Day would be taken in the spirit in which they are given —with much joy and love