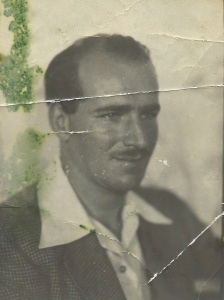 Bill Cohen, my father, in his best Errol Flynn imitation!

A Father’s Day memory: It is 1956. My father is sitting behind the steering wheel of an idling sedan in the driveway of our house in Keeseville. Laura, Jay, and I are squirming in the back seat. Dad is smoking a Kent and listening to a baseball game on the radio. He gives the horn an impatient tap to hurry along my mother, who is inside the house diapering Bobbie and pulling together last minute items for our car trip. He honks again, more loudly. “Where is that woman?” he asks. “We’re going to be late.”

For over sixty-five years, my father was our family’s self-appointed Designated Driver. Born and raised in Queens, my father learned how to drive when he was fifteen years old at his grandfather’s farm in Burlington, Vermont. In 1940, my mother took her place in the passenger seat. By 1955, four children were filling up the remaining space.

Out of financial necessity, our family usually owned “gently used” cars. No matter how pristine they were when purchased, each vehicle soon lost the ‘new-car’ feel once our huge family—with an occasional dog along for the ride—took ownership.

These were the days before cars had safety features. No one wore seat belts; babies sat on mothers’ laps; Dad’s extended right arm held us back when we were forced to a sudden stop.

As the family grew, sedans gave way to station wagons. One or two of us children happily climbed into the back, where we bounced our way to a school function or the beach or a relative’s house or even to visits to our grandparents in New York City, oblivious to any danger. Fortunately, Dad was an excellent driver. He was never involved in an accident. And his only speeding ticket was when—as he never let me forget—he was rushing home from a trip to Plattsburgh after I was car sick.

Not that he wasn’t guilty of “pedal to the metal.” In the 1960s, my father was elected coroner of Essex County, New York, a position he held for over twenty years. When he got the call from the state police that he was needed to investigate an unattended or suspicious death, Dad would rush out to his car, put the Essex County Coroner sign in his window, slap on his “Kojak” flasher on top of the roof, and drive to the scene like a bat out of hell. If the call came in the middle of the night, one of us would often ride with Dad to keep him company. I remember sitting in the passenger seat while Dad careened through the back roads of Reber or Willsboro or Port Kent, praying one of the other three coroners in the county wouldn’t have to investigate our untimely demise.

Soon after they retired in 1981, Dad and Mom began spending half the year in Florida. Each year in mid-October, they drove the 1500 miles to their condo in Lauderdale Lakes. The week before Memorial Day, they took the same route back. Although they eventually took the auto train to reduce driving time, Dad continued his reign as exclusive—and excellent—driver.

As he got into his eighties, however, his driving skills declined. His hearing was poor, his reaction times were slow, and he relied too often on cruise control so he wouldn’t have to regulate the gas pedal. Concrete car stop bumpers in parking lots saved many an eating place from becoming an impromptu drive-in restaurant. Still, Dad insisted on taking the wheel, promising to limit his trips to nearby restaurants and stores.

In 2005, while visiting Mom and Dad in Florida, Jay and his wife Leslie made plans for the four of them to go out to dinner. The usual fight ensued. “I’ll drive!” Jay offered. “Absolutely not,” Dad countered “You’re my guest. I’ll drive.”

The route to the restaurant included a section on a multi-lane expressway. Dad was in the far left lane when he suddenly crossed four lanes to get to the exit ramp. “We watched in horror from the back seat,” Jay said. “Fifteen years later, I can still remember how Leslie’s nails felt as she dug them into my arm until I bled.”

After that incident, we children insisted Dad give up the car. We arranged for Mom and Dad to move into Coburg Village, an independent living facility near Larry and me that offered, among other amenities transportation to stores and doctors’ offices. They flew up to their new home, and Laura and Jay drove Dad’s car to our house. Dad’s Toyota would stay safely in our driveway until Julie picked it up and drove it back to Colorado that summer.

For the next few months, Dad complained incessantly about how we had taken away his independence. The day Julie came home to claim the Toyota, however, Dad pulled out of his wallet the registration AND an extra car key.

“You could have walked down the driveway and driven that car anytime you wanted to!” I said.

After that, Dad grudgingly accepted his place in the front passenger seat when either Larry or I drove. Six months before he passed away, Dad got a brand new shiny red mobility scooter. When I came over to have dinner that night in the Coburg dining room, Dad was already sitting on his new toy with a huge smile on his face. Mom and I followed him as he navigated his way down the long hallway to the open elevator door. Entering a little too fast, he gently hit the back wall. “I’m fine!” Dad said with a wink. “I got this!”

Of course he was fine! My father was finally in the driver’s seat again.

7 thoughts on “My Dad, The Designated Driver”