The history of the deadliest industrial disaster in the history of New York City is intertwined with my mother’s family and in particular, my smart, generous, resourceful Aunt Lil.

My maternal family story began Ragola, a small shtetl town in the southeast part of Lithuania.  My grandmother’s Ethel’s birth mother Channah married Buck (first name unknown), a radical and a “free thinker.”  Buck’s unorthodox views were too much for the religious Channah and her parents. Soon after the birth of their son Rafael, the marriage was dissolved. A few years later, Channah married Elihu Hirsch Osovitz. Rafael was soon joined by a half-brother Sam.

Five years later, Buck came to their home and took Rafeal with him to America. Channah, heartbroken,died a few weeks later during childbirth. Channah’s parents took Sam into their home. The infant Ethel—my future grandmother— was placed in a home a wet nurse.

Three years later, Elihu fell in love with Faigah “Vichna” Levinson, the daughter of a prosperous couple in the baking and grocery business. At first Vichna’s parents did not approve of their twenty-year-old daughter’s marriage to a thirty-plus widower with two children.  However, their union was a love match, a rarity in those days of arranged marriages.

Ethel adored her new mother, In fact, it was not until she was introduced her maternal grandparents seven years later that Ethel realized that Vichna was her step-mother. During that visit, Ethel  also learned that she had an older brother Sam in America.

Elihu was a pious man and a student of the Torah. Grandma Vichna was the breadwinner, working in her father’s store. They shared a shtetl “duplex” with another family. Each side of the small wood building held one room with a curtain in the corner hiding a bed to provide the parents some privacy. The two families shared an outhouse.

By 1899, the couple had four more children sharing their one room house: Joe, Lil, Paul, and Rose. Fearful of the threat of pogroms, Elihu and Vichna insisted their oldest daughter cross the ocean by herself to “die goldeneh medinah”—the Golden Land— for a better life. At Ellis Island, fifteen-year-old Ethel was met by her brother Sam and her half brother Rafael Buck. It was the first time she had met either sibling. Staying with distance cousins, Ethel got a job in a umbrella factory for three dollars a week.

Back in Ragola, behind that thin curtain, Vichna and Elihu conceived three more children: Bea, Ruth, Morris. As the oldest girl living home, Lil was responsible for her younger siblings until she was sent to America when she was twelve years old to join Ethel.

The two sisters rented a room with a family of six children and four other boarders.Giving her age as fourteen, Lil obtained a job as garment worker in a sweatshop in Greenwich Village.  She viewed the location— the top floors of the crowded, airless Aisch Building—as “a firetrap.” To  prevent workers from taking too many breaks or stealing, the owners locked the doors to the stairwells and exits.

Ethel, struggling and unhappy with her job, accepted her brother Sam’s invitation to move in with him and his wife in Baltimore. Meanwhile, Paul, Joe, and Rose followed their older siblings to America.

When Paul encountered health problems working in the sweatshops, Lil relocated him and Joe to Burlington, Vermont. She also gave them  money  to purchase a wheelbarrow and enough second hand items to peddle goods to Vermont farmers and their families. First traveling on foot and then on horse and wagon, the two brothers saved enough money to open a store in Alburgh, Vermont. This was the start of Pearl’s Department Stores, department store chain that grew to twenty-two stores in Vermont and Upstate New York.

Working in the factory on Washington Place, Lil proved to be a  fast and efficient seamstress. When she demanded a raise, she was fired—a blessing in disguise. A week later, on  March 25, 1911, the “firetrap”—the Triangle Shirtwaist Factory—was the scene of the deadliest industrial fires in New York City history.  A hundred and forty-six garment works died from the fire, smoke inhalation, or falling or jumping to their deaths.The tragedy led to legislation requiring improved factory safety standards and helped spur the growth of the International Ladies’ Garment Workers’ Union (ILGWU), which fought for better working conditions for sweatshop workers. (https://en.wikipedia.org/wiki/Triangle_Shirtwaist_Factory_fire)

By that time, Elihu had died. Lil had saved $75  to pay for the remaining family members’ ship passage. On April 11, 1911, an elegantly dressed Lil  greeted Vichna (44), Bea (11), Morris (9), and Ruth (6) at Ellis Island. Lil rented an apartment on the Lower East Side of Manhattan for herself, Rose, and the four new immigrants.

Lil continued to be the main breadwinner in the family. She obtained promotions as a seamstress in various factories specializing in blouses and dresses. She often made as much as $20 a week, a greater salary than even most of the married men with whom she worked. Her hard work came with sacrifices. Lil attended night school, but after a hard day’s work in the shop, she fell often asleep in class. As a result, she never spoke or wrote English proficiently, relying heavily on Yiddish her whole life.

Now that the entire Osovitz family was in America, Vichna now focused her efforts on making sure that her oldest daughter in Baltimore was married. She arranged a match between her Ethel and Joseph Cohen, a lonely tailor originally from Ragola who was sleeping on a cot in his sister’s apartment. On January 14, 1912, Ethel and Joe were married in a large banquet hall  filled with family and friends from the old country. Nine months and four days after the wedding, their son Eli—named after Elihu—was born. Five years later, they welcomed Frances—my future mother.

A few years later, with the entire Osovitz family finally settled in The Golden Land,  Lil married Sam Waldman, a butcher. Lil worked alongside her husband in stores in New York State: first in the city, then Long Island, St. Regis Falls, and, finally settling in the Syracuse area. The entire family remained close throughout their lives, as have their many descendants of the original nine siblings from Ragola, Lithuania. And all of us recognize and appreciate the strong role our Aunt Lil played in our history. 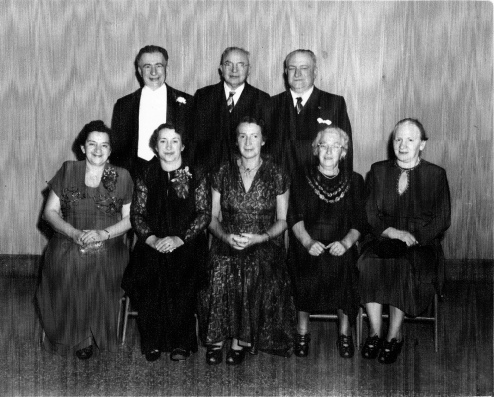 The Osovitz Family: Bottom left to right: Rose, Ruth, Bea, Ethel, and Lil. Top left to Right: Paul, Sam, and Joe. All their names were Americanized once they moved to America.

2 thoughts on “My Family’s History of Immigrants”