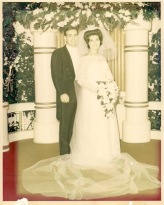 Four of the happy couples: Goldbergs, Grossman’s, Plass, and Secans

What does The Jewish World have in common with the following six couples? All are celebrating their Fiftieth Anniversary!

Susie and Ed Goldberg met each other at a dance at The Laurels, a resort in the Catskills. Susie, who had just turned seventeen, came back to the room that she was sharing with a girlfriend and found several young men sprawled out asleep in the beds and couch of her hotel room. She called security to have them all thrown out. The story of the “Good Girl with Chutzpah” quickly spread through the guest grapevine. Ed was impressed “if I ever go steady again, I want my girlfriend to be just like you,” he said,and then asked for her number.

After casually dating for eighteen months, the two started “going steady” once Ed was drafted into the army. When he got his orders to go to Vietnam, Ed proposed. Despite parental pressure to wait until he returned, Susie and Ed chose to have a small wedding at Temple Israel in New Rochelle, New York, a month before Ed shipped out. Fifty years later, Sue and Ed agree that many factors that constitute a great marriage:  love, communication, empathy, patience, compromise, quality time with family, with friends, and especially with each other.

“Bubbemeises”—tales from a Jewish grandmother— brought Hedy and Harvey Flechner together. They were just sixteen and seventeen when they started dating as freshmen at CUNY City University of New York. The first time she met him, Hedy’s grandmother said he was an incarnation of  her own late husband, Frank. “I’ve dreamed about this day,” she told Hedy. “He’s the man you’re going to marry. Just finish your college degree first.”

On their one month anniversary, Harvey gave Hedy a red rose, a tradition he continues every month to this day. “When he was too poor to buy a rose, he’d steal one from a neighbor’s garden,” said Hedy. Six hundred and fifty roses later, they attribute their long marriage to carefully picking their battles and following Hedy’s beloved grandmother’s advice. “Never go to bed angry,” she told the young couple. “It will take away the fun of being in bed together!” Smart woman, that bubbe!

A grandmother also had a hand in the Plass’s marriage. While spending her summer on Far Rockaway on Long Island, Mickey was introduced by her girlfriend to “the cute boy who works at the penny arcade.”  After their first date, Grandma Spitz told the soon-to-be college freshman  to finish her teaching degree before marrying Richard. “I told her I barely knew him,” Mickey recalled, “but she insisted he was The One.” They were married—the summer after Mickey graduated college The Plass’ advice: Don’t marry anyone with expectations to  change them. “Why would you want to change someone you really love?” Mickey asked rhetorically.

Chris and Bernie Grossman met at a dance at Grinnell College at the beginning of her freshman year. Bernie, a junior,  was about to ask another girl to dance when Chris “got in the way.”  They dated while at college. As they both were from the Chicago area, they continued their relationship during school breaks and even after Bernie graduated. They got engaged during the summer after her junior year. Chris took Jewish conversion classes through her senior year, and  they were married the following summer after her graduation.  Chris and Bernie follow the advice that Chris’ parents’ offered at their fiftieth anniversary: “The secret of a long marriage is to always keep in mind that the little things that annoy you about your spouse are not that important in the grand scheme of things.”

The Secans met on a blind date. Phyllis’s sister-in-law and Joel’s sister, who were friends, gave Joel Phyllis’ number. Five months later, he finally made the call and invited Phyllis to lunch at Nathan’s in Oceanside, Long Island. They had such a good time that lunch was followed by a movie,dinner, and a commitment for a date on Monday night. By Tuesday morning, Phyllis knew that this was “the love of her life.” Ever since that first night, Phyllis and Joel have built on their immediate mutual attraction by anticipating each other’s needs staying “up” when the other was “down,” and, most importantly, finding ways to keep the romance going. “Having a date night is a must,” Phyllis said.

Betty and Steve Schoenberg were fixed up by their fathers, who knew each other through their jobs with the United States Postal Service. “Eighteen year old” Steve (he was really twenty-one) asked sixteen-year-old Betty to join him on a boat ride on the Hudson River. At first regarded as passing summer romance, Betty and Steve continued to date that fall. “It was hard to say we didn’t like each other when our own parents had set us up,” recalled Betty. They got married after Betty’s sophomore year at NYU. “A good marriage takes a great deal of patience, said Betty,” and a good sense of humor—a VERY good sense of humor.

Six couples. Six decades of marriage times five. Eleven children and twenty-one grandchildren later, all have no regrets. Phyllis Secan summed up all the couple’s life-long romances in her outlook on the future: “Our marriage just keeps getting better and better.” Congratulations to happy couples and The Jewish World on their Fiftieth Anniversary. May you all go from strength to strength.