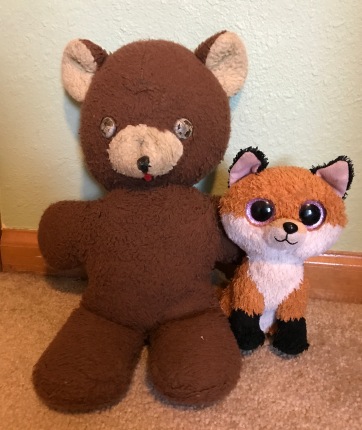 Mark Silverstein and Evey with her lovey

Rerun, like his distant English relative Paddington Bear, has had quite an interesting life.

Two days after my daughter Julie was born, “Big Brother” Adam visited her in the hospital with a brown stuffed bear in tow. He and my husband Larry had picked it out at the toy store that morning. They named him “Rerun,” the moniker—hats off to Charles Schultz— we had given my increasingly growing tummy during the pregnancy. Rerun took his place at the corner of the hospital bassinet, allowing Adam to recognize his sister in the nursery. Julie reciprocated the day she came home from the hospital when Adam found a Spiderman doll waiting on his pillow.

Thus began Rerun’s journey through Julie’s life. He was a permanent resident of her crib, her “big girl” bed, and her college dorm room. Rerun traveled cross country with Julie when she started her new life in Colorado. He even had a place on Julie’s bed stand after she married Sam.

And now my daughter’s daughter has her own lovey. Sylvie latched onto Foxy when Julie brought  the big-eyed Beanie Boo home from an airport gift shop. Sylvie carries him with her everywhere, tucked securely under her arm. When he isn’t being held, Foxy watches over Sylvie when she eats and when she takes her bath. And every night, Foxy accompanies Sylvie to bed, where they are joined by Rerun, who now has a special spot in the crib.

While writing this story, I posted a request on Facebook for people to share their  “lovey” story about a toy or item with which they or someone they knew were totally attached. Over a dozen people responded—with tales as far away as Israel. Anne Rothenberg shared that her grandson Amiad is attached to large stuffed dog named “Clavlavi” (“puppy” in Hebrew).  The dog has been a part of their family for almost a decade. “He is pretty bald from years of stroking and washing,” Anne said, “but the whole family loves him so much that he is included in all family pictures.”

People reached back decades into their own childhood to talk lovingly of their favorite toy or blanket. Lee Ryan, my former student, wrote, “At age sixty, I still  have Teddy.  Of course, I can be without him, but I am grateful he’s still around.”

Susan Lenigan recalled that over sixty years ago, her sister Judy had her “Kitty.” As time went by, the stuffed animal’s eyes fell out and his face became faded. During one of her visits, their grandmother  decided to “fix” Kitty while Judy was in school. She sewed on new button eyes  and painted on a new face.When Judy came home and saw Kitty, she cried and ran away from her precious companion. She gradually—and grudgingly—accepted the imposter.

Linda LaFlure Nelson also learned that loveys often were best untouched. She and her daughter still remember the sad day that Linda washed Sara’s beloved “blanky” “Sara burst into tears sobbing that it no longer smelled like her.”  Linda said. “I felt like a bad mommy.” Blanky ended up as nothing more than a smelly knotted ball of tattered material. Nevertheless, Sara, now in her thirties,  has “Blanky” tucked away in a drawer in her home.

And like Rerun, loveys have traveled the country—and world. Becky Silverstein’s daughter Evey had a crocheted pink blanket with yellow edging that Becky received at her baby shower. Whenever Evey was hurt or fussy, Becky would sing “Mr. Blankey makes it better, yes, he does.”  Evey held it all day, flipping the corners back and forth repeatedly, self-soothing and settling herself down.  It went everywhere: in the car, in the crib, in the high chair, in the playpen, on every family vacation.  Eventually, Mr. Blankey also went with sixteen year old Evey for a two week stay in Scotland and for a three month trip Israel after she graduated from the Jewish Day School in Maryland. Mr. Blankey then went to college in Boston, moved with her and her fiancee to California, and went on their honeymoon cruise in the Mediterranean.  Now Mr. Blankey has a place of honor on their bed in San Jose, California, providing a cozy napping spot for their dog, Kiwi. As Becky said, “Mr. Blankey still makes it  all better.”

Losing loveys can become  a major emergency. Sharon McLelland’s daughter’s cow, which still is “alive” with more stitches than body, once was FedEx’d overnight soaking wet as he was so needed. And those emergencies sometimes spill over to adulthood. Lynn Urgenson’s daughter Sue had a hand crocheted  “Blan-key”that she slept with even up into her adult years. When Susie moved to Israel, it was the one item Lynn forwarded to her. Unfortunately, it got lost in the mail. When the package finally was returned to Lynn six months later with “Address Unknown”  stamped on it, Lynn decided to avoid further heartache and deliver the tattered blanket in person next time she saw Sue. “My granddaughter Sarit has a beautiful one I made for her,” said Lynn, “but she doesn’t have same attachment!”

Can one avoid disaster with back-ups? My daughter has two more Foxy’s tucked away in case Sylvie loses her constant companion. Sometimes, however,  even that plan backfires. Judy Lynch’s daughter Katie slept with a stuffed panda. When Katie was twenty months old, Judy went back to work and bought a second Pandy so one bear could stay at home and the other could stay at the sitter’s. Katie became attached to both Pandys and had to have both of them in both places.  Judy recalled,”Who knows how many times we had to drive back to the sitter’s when we realized we’d left a Pandy behind!”

Fortunately, some children accept change. Jackie Betters’ grandson had a blanket named “Meme” that he slept with every night. His mom washed it so much from his dragging it everywhere with him that it got really thin. She folded it in half and sewed it. After several more washings, it got thinner. So she folded it again into a twelve inch square and, eventually into a six inch square. His mom has it tucked away in her dresser just in case he should ever need it again —even though he is a grown man with a newborn son of his own.

Now that children and parents are gearing up for school opening, don’t be surprised to find loveys hidden away to provide needed security. Over thirty years ago, Julie Thompson Berman’s son had a beloved “blankie.” All through kindergarten he carried a tiny piece of it in his pocket. He never took it out, but  he would just put his hand in his pocket, touch it, and be comforted.

8 thoughts on “Loveys “Make It Better!””