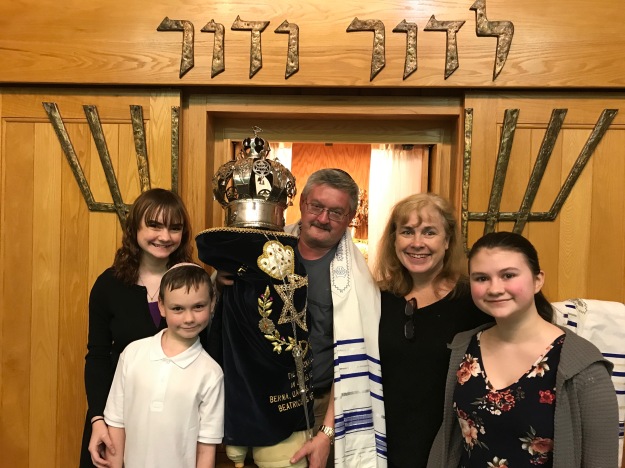 Peter had come in to the antiques mall in Kissimmee, Florida, on an early spring day in 2016 to look for a silver serving platter for his wife Kelly. He was a frequent visitor, often successful in his search for a specific old, beautiful object. And sometimes he bought interesting items “just because.” A few years earlier, Peter had found a Kiddish cup and a prayer book. Kelly had polished up the sterling silver goblet to use at their weekly Shabbat dinners. Their son Gabriel, who was six years old,  had confiscated the prayer book, refusing to let any of his siblings see the treasure he kept next to his bed.

Unlike the previous Judaica he had purchased at Laniers, however, Peter had a differenT intent for that day’s find. Despite its sad appearance, Peter knew that he was looking at a Torah crown, an object made to cover, protect, and honor a Torah scroll, the sacred parchments on which the first five books of the Tanakh are meticulously inscribed.

Peter asked how such an object landed up in an antique store in Kissimee. The owners told Peter that the Torah crown was one of many objects stuffed into an abandoned storage locker. The identity of the original owner was unknown. Forgotten? Left behind? Abandoned as the monthly fees for the space in the storage facility had become unaffordable?

No matter. After the management of the storage facility had made a good faith effort to find the renter without success, the unit was put up for auction and purchased by Laniers. The Torah crown, one of many objects in the unit, had sat in a corner of the store for months, gathering tarnish and dust, until it had caught Peter’s eye.

Peter felt  a sense of loss that such a piece of Judaica sat unclaimed, unused, unappreciated, He purchased the crown—along with a silver tray for Kelly—and brought them to their home in St.Cloud.

A tragedy early in their marriage had led them to reclaiming their Jewish roots that had been lost over the previous three generations. Peter’s Jewish great-grandfather had married a Catholic and assimilated. Kelly’s great grandparents had changed their names to hide their Jewishness. Peter had memories of conversations with his grandfather about Jewish food, and music; Kelly had early memories of lighting Shabbat candles with neighbors who were observant Jews. Otherwise, neither Peter nor his Kelly were raised with any religious affiliations or traditions.

Peter and Kelly had much in common. They both were one of four children with similar birth years. Both of their fathers were career diplomats, jobs that took their families around the world. Kelly and Peter first met when they were fifteen and seventeen respectively outside the library at their high school in Bangkok, Thailand, where both of their “embassy families” were stationed. Subsequently, their fathers were assigned to Seoul, Korea, where Peter and Kelly both attended college.

After their graduations, Peter joined the Marines and Kelly married an Army officer. Five years and two children later, Kelly was divorced. She and Peter reconnected while both their families were living in Washington, D.C..They were married in 1989.

In 1990, while Peter was in Kuwait for the first Gulf War, their first child together was born. Tragically, Joel died when he was three months old of what was first diagnosed as Sudden Infant Death Syndrome. Authorities later determined that Joel and two other local children had succumbed to lead poisoning linked to lead in the pipes of their municipal water supply.

Devastated by their son’s death, Kelly and Peter began a search for answers—and faith. “We were looking for something we could give our children,” said Kelly. “We wanted something bigger than ourselves, something we had not had.” They explored different denominations, questioning chaplains, pastors, priests, and rabbis in hopes of finding a spiritual connection.

Kelly’s best friend, who was Jewish, knew of the Gutensohn’s quest.  She invited Kelly to a

Friday night service at her synagogue. “The first time I went, it felt like coming home,” said Kelly,” like the piece of me that was lost had been found.”

Soon after, Kelly prepared her first Shabbat dinner for Peter and her two children, complete with blessings over the candles, the wine, and the challah and a traditional meal.. As the family grew with the birth of eight more children, Kelly learned more about Judaism, its traditions, its holidays. She taught herself and her children Hebrew. The family observed the Jewish holidays.

The family attended conservative synagogues, but they were not comfortable with the strong focus on tradition and the literal interpretation of scripture. While Peter was stationed in Virginia with the Marines, however, they were involved with a group of fellow Jews who met in each other’s homes for Shabbat and the Jewish holidays. And they celebrated Shabbat every Friday, including the Friday before Peter came home with Torah crown from Laniers.

Moved by the  by crown’s hidden beauty and its mysterious past, Kelly and two of their daughters began the process of polishing and restoring the intricate metalwork to its full shine. Family obligations filled their lives, however, and the still tarnished crown was hidden away in one of their closets for several months. Finally, in January 2017, the Gutensohns began in earnest to find a “proper home” for the Torah crown.

Their original intent was to donate it to the Holocaust Memorial and Education Center in Orlando. On further consideration, the family decided that the crown belonged not in an archive but part of a living, active congregation.

The Gutensohns had  attended services at Congregation Shalom Aleichem on Pleasant Hill Road in Kissimmee. Remembering the shul’s warm, inclusive atmosphere, Peter contacted Rabbi Karen Allen, who assured them that his family’s generous donation would be not only accepted but also valued and cherished.

On a Friday night in May 2017, just before services were to begin, Peter walked into Congregation Shalom Aleichem carrying the huge crown on his shoulders. Two weeks later, Peter brought Kelly and three of their children—Liza, Karen, and Gabriel—to services. Harry Lowenstein, a Holocaust survivor and one of the founding members of the shul, had brought the crown home to shine it to its full glory and had placed it on the synagogue’s Holocaust Torah. The crown now has a home.

On Yom Kippur, with Kelly and three of their children watching, Peter was given the honor of holding the Holocaust Torah during Kol Nidre. They are now active members of the synagogue, attending services, sharing the break-the-fast, helping to build the Sukkah. Their fifteen-year-old daughter Karen will be participating in Birthright Israel this December.

“This beautiful artifact has brought them back more deeply—individually and as a family—to their Jewish roots and identity,” said Rabbi Allen.

“Every Friday night when I light the Shabbat candles, I think about my grandparents and great grandparents,” said Kelly. “They thought that religion was a small thing to sacrifice  Looking back over the past 150 years, I see my family members with no anchor, no roots, and no identity. They gave up more than they could ever know.”

The Torah crown restored to its full beauty.

5 thoughts on “Lost and Found: A Torah crown and family return to community”