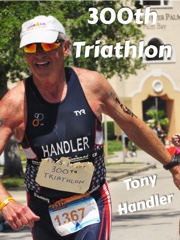 Eric Lagerstrom, a 29 year old from Gresham, Oregon, may have been the official male top finisher in the 2018 St. Anthony’s Triathlon, which was held on a beautiful April day in St. Petersburg, Florida. However, in the pack of over 3000 participants was an individual that many considered the true winner. Seventy-nine year old Tony Handler had completed his 300th triathlon since his “terminal” diagnosis thirty-five years earlier. “I beat Mr. Cancer again,” said Tony with satisfaction.

Waiting at the finish line, as she had done almost every time before, was his wife, Narda, his childhood sweetheart from Newark, New Jersey. “I think I missed only five races in his entire triathlon career,” said Narda

None of this seemed it would be possible thirty-five years earlier. In 1983 Tony was driving Narda and friends home from an evening out when he was seized by excruciating abdominal pains.  His friend took over the wheel and drove Tony directly to the hospital. The doctors in the emergency room determined that his stomach had ruptured and immediately operated.

Death Around the Corner?

Two days after the surgery, Tony was transferred to the National Institutes of Health (NIH) in Bethesda, Maryland. The doctors there gave the Handlers the devastating news: Tony  had pancreatic cancer and had at best two more years to live.

Tony, who was forty-five,  refused to accept the diagnosis. After several more surgeries, he was chosen to participate in clinical trials at NIH with nineteen other patients who shared his rare form of cancer.  A willing “human guinea pig,” Tony endured hours of medical protocols, innumerable experimental drug treatments,  and seven surgeries.

While undergoing the  regimen, Tony saw an article that stated  the city of Baltimore was hosting the Bud Lite Triathlon in July 1985.   “I  thought this would be a good way for me to fight the bleak prognosis.”

Tony was not new to athletic competitions. Born in 1939 in Newark, New Jersey, to first generation Jewish  parents, he had participated in Weequahic High School’s cross country and swim teams, serving as the latter’s captain.

Cheering him on in the stands was Narda Mandell. Shortly after his bar mitzvah at Congregation B’Nai Jeshrun in Newark, Tony had met twelve-year-old Narda and they soon became a couple. “I was—and still am—his biggest fan,” said Narda.

After Narda completed high school and Tony completed his stint in the army, Tony and Narda were married on September 27th, 1959. Narda worked as a receptionist in a bank until their first son was born.

In 1960, Tony was hired by IBM and spent the next 12 years working and going to Rutgers at night to earn a business degree.  Tony received a promotion to IBM’s  to its Washington DC office, and they moved to Crofton, Maryland, to be closer to the company’s Washington office. In 1983, they were living what appeared to be an idyllic life when their world was turned upside down.

Tony was determined to survive. He set his goal to compete in the 1985 Bud Lite Triathlon. Initially, he could only do a slow walk/run.  As his stamina increased, he began running two, five, ten miles. “Running made me feel as if I were fighting back,” said Tony. He dusted off his bike and rode the Maryland countryside. He found a local pool, donned goggles and a Speedo, and began swimming competitive laps for the first time since his high school swim team days.

On July 1, 1985,  Tony completed the Baltimore triathlon, which combined a one mile swim, 24.8 miles of bicycling and 6.2 miles of running. Tony was far behind the winning time of one hour and 55 minutes, but he had won a personal victory. “I only had one competitor,” said Tony, “and that was Mr. Cancer.”

Through it all, Tony continued his job as an IBM consultant. The management at the company were supportive, never hesitating in giving the time he needed to have the multiple surgeries and finish his recovery. After work and on weekends he continued to work out and participate in triathlons across the United States. “I needed victories wherever I could find them,” said Tony. “Every time  I crossed that finish line, I felt like I beat Mr. Cancer again.”

In 1988 Tony received a promotion to senior consultant and was transferred to Tampa, Florida, where he continued to compete.

By the time he was approaching his sixtieth birthday, Tony had completed 200 triathlons. He set his goal even higher by signing up for the 2000 Florida Ironman Triathlon.  A back injury that was unrelated to cancer forced him to cancel. But in 2001, he completed the Panama City-based competition, which was composed of a 2.4-mile swim, a 112-mile bicycle ride and a marathon 26.2 mile run. He felt such a sense of accomplishment, he did again when he was 62.

When he retired from IBM in 2003, Tony and Narda moved to Solivita, a 55 plus active adult community located in Central Florida.

As a cancer survivor, Tony was determined to “pay it forward.” Soon after their move, he organized the first annual community-wide three mile walk/run in Solivita to raise money for the American Cancer Society (ACS). Beginning in 2012, several Solivita clubs joined together to establish an annual Relay for Life event that supported ACS. Tony’s run/walk was folded into the community’s umbrella fundraising efforts. As of 2018, the combined efforts have raised over $700,000, of which $60,000 was raised by Tony’s walk/run event.

His story of survival and his fundraising have earned Tony state and national recognition. In 2013, Tony qualified to compete in the National Triathlon Age Group Championship in Milwaukee. At the concluding banquet, Tony was given  an award for being the  “Most Inspirational Athlete.” In 2015, Tony qualified to represent the United States on Team USA at the World Age Group Triathlon Championship in Chicago.

In 2016, Tony was the recipient of the  “Geriathlete” award at the Growing Bolder Awards banquet in Orlando, Florida. He, along with other Central Florida seniors, was lauded for  “pursuing his passions and living lives of purpose while making a difference in the lives of others.

Sadly, Tony is the only surviving participant of the twenty original participants in the 1983 NIH clinical trials. Doctors at the Moffitt Cancer Center continue  to track Tony’s progress and oversee his life-saving medications and monthly chemo injections. His remarkable medical history has been the subject in professional journals and conferences. Researchers agree that what Tony often calls his “crazy exercise routine”appears to have been a factor in his longevity.

Along with their busy life in Central Florida, the Handlers enjoy the pleasure of three sons, one living in Maryland and the other two in Florida with their wives and five grandchildren.

Tony views the St. Anthony’s Triathlon as another victory against Mr. Cancer, a fight he hopes to continue waging for as long as his body is able to.

“I beat the odds,” said Tony. “I just hope my story is an inspiration to other cancer patients to “NEVER GIVE UP.”

5 thoughts on “Beating the Odds”