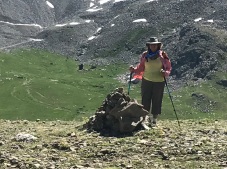 Virginia went to her grave hating her body.

A lifetime member of  Weight Watchers, I had been attending meetings in Clifton Park since 2013. I had reached a goal weight approved by my doctor, but I continued to find the weekly meetings helpful in keeping myself honest as well as connecting with other people—mostly women—who were fighting their battle against the scale.

When I moved to Florida in June 2015, I immediately joined a local Weight Watchers group, where I met Virginia, another “regular” who I guessed was in her late seventies. With the help of her walker, she was always willing to stand up and share her experiences on her weight loss journey. By the end of 2016, she had reached her one hundred pound loss milestone, and her self-confidence grew. Over the last year, however, she plateaued and then saw the scale inch back up. Hoping to lose at least fifty more pounds, Virginia tried hard to reverse her negativity. “Every day, I say to myself in the mirror, ‘Virginia, you are going to reach your goal!’” But she continued to struggle with her weight and self-image.

On August 24, Virginia was noticeably absent. “I have sad news,” said the leader at the start of the meeting. “Virginia passed away this past week of cancer.”

I was saddened, angry, and afraid. Saddened that we didn’t know she was dying of cancer. Angry that she went to her grave hating herself for being overweight, hating the person in the mirror for that number on the scale. Afraid that I too would be obsessed with the scale, not comfortable with my body, until my dying day.

As a young child, I was so small —sixteen pounds at two years old—my nickname was Peanut. But my family’s diet, heavy on brisket and bread and baked good and bowls and bowls of ice cream, along with genetics, finally won out. By eight years old, I was chubby.

When I hit puberty, I lost weight and gained height The good news was that I inherited my father’s long thin legs and striking blue eyes. The not-so-good-news, at least in my “striking blue eyes,” was that I also inherited my paternal aunts’ broad shoulders, short waists, and tendency to pile on the pounds. While never medically obese ( 20% over one’s ideal weight) my entire adult life, I found myself at times overweight. I joined Weight Watchers for the first time when I was twenty-six, beginning a lifetime of cycling in and out of weight loss programs.

Wherever I am on the scale, I have always been thankful for a healthy, strong body. My health indicators—blood pressure, cholesterol, blood sugar— are all in the normal range. I bike, hike, walk, take exercise classes, But l still have found myself unhappy with my weight and my body image.

While doing research for this article, I found that I am not alone. A 2012 study of women fifty and older published in International Journal of Eating Disorders found  that 71% were currently trying to lose weight; 79% felt that weight or shape played a “moderate” to “the most important” role in their self-concept; 70% were dissatisfied with their weight and shape compared to when they were younger; and 84% were specifically dissatisfied with their stomachs. In a similar study published in 2013 in the Journal of Women and Aging found that the majority of women aged 50 and older are not satisfied with the way they look, with only 12% of participants sampled reporting body image satisfaction.

The causes of obsession with the scale and our perceived negative self-image are as close as the television in our living rooms, the magazines on our coffee table, the movies playing at our local theater, the advertisements bombarding us daily. In a 2013 article on women’s body image in Slate, Jessica Grose notes that media images of ridiculously thin women surround us.”We live in a culture where thinness and beauty are highly valued for women and wealth and success are often considered to go hand in hand with a slim figure.” She cites the resulting negative effects: a preoccupation with diet, low self-esteem, low self-confidence and/or never feeling that one’s body is adequate.

The damage that such images creates starts in girls as young as nine and ten (over fifty percent feel better about themselves if they are on a diet) continues into middle age and, as in the case of Virginia, persists into old age. In her article Body Image: How It Affects Middle-Aged Women, Crystal Karges captures the continuum.  “The little girl who once felt ashamed of her body or unsure of her place in the world may find that she is still unable to accept or love herself in the later years of her life.”

Maybe society is changing. The Fat Acceptance movement seeks to change anti-fat bias in social attitudes. Companies including JCPenney, Nike, and Unilever have launched campaigns meant to change how gender is portrayed in their advertising. Even Mattel, who has faced criticism that its female dolls promoted unhealthy body ideals,  underwent a revolution.The 2016 line of Barbies introduced three new body types in addition to the stick-thin original—tall, petite, and curvy (or what I like to call zoftig).

My reaction to Virginia’s death and my subsequent research has been a learning experience for me. I now recognize that I can honor Virginia’s memory by being more accepting and appreciative of my own body—strong, curvy, healthy, imperfect—and  of those of others, no matter what their size and shape. I have promised myself to focus less on the number on the scale and more on the benefits I can obtain from maintaining a lifestyle that includes healthy food choices, regular exercise, moderation, and a positive attitude.

In the mold breaking JCPenney ad, one of the “real women” represented states, “You can’t love your body for what you hope it turns into without actively loving it for what it is today.” Virginia and all of us women who battle the scale and, more importantly, our self-image, need to love ourselves where we are right now.

4 thoughts on “Finding Beauty in the Body You Have Now”